Community of Easter Hope (4): Theology of martyrs, the foundations for new community

Every time Midori and I visited Nakoso Christ Church in Iwaki city, Reverend Sumiyoshi surprised us by his deep love for the community and wide vision for the whole nation of Japan. This is surprising according to Midori because it is not yet common to see an evangelical pastor act out of such a comprehensive social vision for his ministry. Since our first meeting a year ago, I could not stop talking about Rev. Sumiyoshi's testimony of repentance after encountering Jesus in his dream (read the full testimony here) wherever I was asked to share about Fukushima. He seems to have found a balance between solid theology and sensitivity to the Spirit's movement to discern carefully, yet boldly, when Jesus calls him, through whatever media Jesus uses.

During my November visit, I was very curious to hear about the theological seminar he had organized for pastors to discuss the theological implications of the nuclear crisis in Fukushima I asked him about the seminar because I was interested in hearing about how he developed such a vision of connecting  theology and social crisis. This time to my own surprise, he told us a story how he came to admire a Korean martyr from the 20th century, about whom I knew very little.

Rev. Sumiyoshi has been part of a theological association that studies the life and ministry of Chu Ki-Chol, a Korean pastor who was martyred during World War II. When Japanese pastors go abroad to study, they generally choose Western countries such as the USA and Germany. But Japan Alliance Christ Church (the denomination to which Rev. Sumiyoshi belongs) sent a pastor to Korea to study the life of Chu Ki-Chol.

During the colonial rule of the Korean peninsula by Japan from 1910 to 1945, the Japanese government forced the Korean people to worship the Japanese emperor at shrines. For Christians, this was tantamount to idol worship. Rev. Chu Ki-Chol refused to worship at the shrines. He was imprisoned and in the end was poisoned to death in jail. Sumiyoshi continues:

Where did you get the vision to start a theological seminar on the nuclear issue?

It is sad that Japanese churches also supported the policy of Japan's colonial rule of the Korean peninsula... With this historical regret, I am very interested in why martyrdom was not happening among Japanese Christians. Even in Korea, not all Christians were martyred; some complied and worshiped at the shrines. Based on these facts, the main purpose of this seminar [on nuclear crisis] is to learn something from the spirit of Reverent Chu Ki-Chol and to implement that in Japan.

What is the real problem with the nuclear power plant?
"Some people are calling for the denuclearization of Japan, but this idea creates an issue – how can people in Fukushima live without nuclear power plants? If this issue is not considered, the idea of denuclearization is nothing more than words on paper. With this regard, I have been appealing for a long time for the need to start a company, or to invite companies to Fukushima.
If we go with the idea of denuclearization, what should we do? We have to work on promoting alternative energy."
Nakoso Christ Church has been serving the community ever since Jesus appeared in Sumiyoshi's dream after the disaster. They had non-Christians coming to ask about 'the greater power than the tsunami' which Christians seemed to have. Mr. Sato, a lay-leader in the church is one of such courageous Christians that non-Christian neighbors have been witnessing.

Mr. Sato's first career was in nuclear engineering and he understands the power plant issues very well. His second career was recently ended on March 10, 2011, only one day before the disaster. He's thankful (!) for being laid-off from work so he could fully focus on disaster relief work through church. He told us about the day of the disaster and the first few days of the chaotic situation in Nakoso town when Midori and I visited the church on Sunday, March 11, this year - the anniversary of the disaster.

I was watching TV and suddenly an earthquake came. I realized it was a big one. It last very long. I opened the window. The neighbor’s house roof tile started falling. I prayed, “God, this is your land and your house.” I asked God for his protection. When I finished praying, the earthquake ended. I went outside to see the neighborhood. All surrounding block was broken and affected by the earthquake. I quickly got in the car and took a couple of elderly neighbors in my car and drove to the hilly area as I expected a tsunami might come. But that tsunami was already receded quite a bit along the river because the embankment stood firmly, so it didn't cause any major damage in the area. Then I thanked God for his protection.
Local church, a new family in Christ

After moving to a couple of different evacuation shelters, Mr. Sato eventually came back to his home. He's been helping Rev. Sumiyoshi and the church in various relief activities. His son came back from Tokyo area soon after the disaster and decided to stay and started helping as a youth worker at the church. Mr. Sato's son is now a 'big brother' to three young new believers who started coming to the church a few months after the disaster.  The three boys live with their grandparents and father who works at the crippled Fukushima Dai-ichi plant. They hardly see their father at home especially after the nuclear crisis because of long hours of work and the long commute each day. Their school was close to the ocean and hit badly by the tsunami. Some friends from school went missing after the tsunami but they stopped looking for them, so they do not talk about school or friends.

On Sundays, Mr. Sato or his son pick up the three brothers to church, and after church, the boys spend time with the Sato family - doing their homework, playing soccer, or having dinner together or anything they feel like doing with their 'big brother.' It was very refreshing to see young faces in a church where most members are elderly.

Midori and I arrived at the church a few minutes before the service on March 11, so we had a chance to talk with them briefly. The smiles on their faces conveyed the hope and joy they found in Christ in the midst of tragedy and crisis they had gone through because they now have a new spiritual family.


(Question) What do you want tell other people in the world who hear about Fukushima?
Youth leader (man in white jacket) : I believe God really cares and loves everyone. I want to serve and help everyone to get saved.
Boy 1: It was very a very difficult time [during this year], but the most important thing I could think of is “thank-you” and appreciation and cooperation. We'll be able to get through this if we all stay together. Please hang in there!
Boy 2: When the earthquake happened, everything stopped. Water stopped, etc.. We now have water and things are moving. I am thankful. Please hang in there. Let’s overcome this crisis together.
Boy 3: This earthquake hurt many people. Please pray that this kind of earthquake will not happen again. Please be grateful to each other. By saying “thank-you” everyone will be happy. 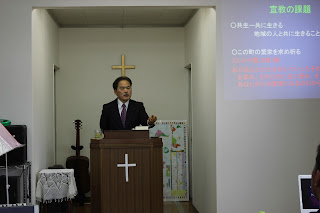 Rev. Sumiyoshi spoke about the identity of his church in terms of local mission, a mission to serve their community. He shared the church's plan to start working on long term economic recovery in Iwaki to serve the community. I prayed with them that God would give them strength and power, the greatest power that comes from Jesus, who helped them to overcome the fear of both tsunami and radiation (read my first story about Nakoso Christ Church - here).
Posted by Soohwan at 1:37 AM