“Karen, tell your mom that I’d be coming back only with the radiation dose equivalent to 2 or 3 CT scans in a worst possible scenario, like if I would stay outside all day long for the whole time, right near the nuclear plant! That’s still less than what your mom’s had for the last 4 years!”

Before I went to Japan, I called my cousin to tell her and my aunt about my plans. After having so much difficulty of figuring out the technical jargon about radiation when I was reading articles and websites, I ended up translating those to the language which my family could understand. I knew in their minds they could picture about me ending up in a hospital with my hair falling and vomiting upon my return to Canada. But I am here enjoying peaceful water on the opposite end of the Pacific Ocean on Galiano Island for a few days before returning to my "normal" life in Vancouver.

My aunt is one of my heroes of faith. After her breast cancer surgery in 2006, she recovered remarkably well. Since then she’s traveled to Cambodia, Thailand and Africa for short trips. I thought if she could do it and face each day of her life, I should be able to do this. After all, I had lived in some countries where we had been through some politically tough situations. I had enough rationales to fight fears of radiation until the moment I got off the plane in Narita Airport when fear finally kicked in from a totally unexpected source, at least for my generation. Then I realized my true fear was not radiation or Japan, but the nature of uncertainty, all coming from inside of me: not knowing what was going to happen. I was not in control, and I did not like that at all.

So I waited to the end of my trip to write about radiation, or fear, to be honest. I waited partly because I wanted to make sure I would complete the trip as planned (yes, the fear factor did work in me) but more importantly, I wanted to know how I would feel about radiation having crossed that bridge. Do I feel relieved to know that nothing happened to me while I was there? Do I feel scared and unsure about any effects that may come later in life? Do I feel proud of having been there and done that? I do not know what to say at the moment simply because I do not know what tomorrow will be like for people in Fukushima until TEPCO can finally stabilize the current situation. But for us those who are trying to understand, trying to help out, and at least offer prayers, we need to understand what is going on in a different light than what media portrays and convinces us to believe.

As it was part of the purpose of my going, I would like to share just a few facts of radiation that I experienced. First, this is based on the things I heard from Mr. Suzuki in Yamato in my first week and I also checked more from Wikipedia before writing this.

The rate an average person is exposed to radiation per year is approximately 2.4 mSv and it varies from country to country. In the US, it is around 4 to 6 mSv, which translates to about 1 to 1.64 μSv /hour (that is if you were outside for 10 hours per day for 365 days). And if you smoke a pack of 20 cigarettes every day, then you will end up accumulating about 20 mSv or more per year.

So, how bad was it in Fukushima while I was there?

This map on the right side is our itinerary (blue arrows) in Fukushima (area within the red borders), and our team had a Geiger counter, so we could check the reading everywhere we went. 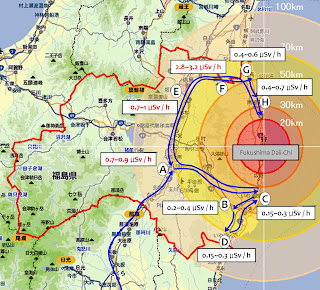 Here is a brief overview:
1. April 18: We arrived in Koriyama town (A) from Tokyo. We also spent our last couple days there.
2. April 19: We went to the coast of Iwaki(C), and the central part of the city (B).
3. April 20: We went to the south end of Iwaki city (D).
4. April 21: We drove about four hours to go to the north of the nuclear plant. We passed through Fukushima city (E), the capital city of Fukushima Prefecture. We stopped briefly at Ryozen (F), a mountain town, because it had the highest radiation reading of all places we visited. Then we visited Soma (G) for a couple hours and went to visit two churches in Minami-Soma (H), one of which is located in 23KM north of the plant. The ranges of the radiation readings on the Geiger Counter showed as below (and on the map):

For my seven day trip in Fukshima I was exposed to a total amount coming to less than 0.1 mSv. It was just about a dose of one chest X-ray. Did I go to only safer places and avoided all the bad places? Or was I lucky to get good winds and clean rain on my side (because many people prayed)?

As you look at the map above, one common misperception I had before coming out (and you might too!) was that the closer you go to the nuclear plant, the higher the radiation you get exposed to. That is simply not true. Iwaki, located in the coast between 30 -50 KM zone, gets a lot of wind from the ocean, so the radiation reading is lower in Iwaki than Ryozen, a place the middle of a mountains outside 50 KM zone, where air continues to accumulate. Except for Ryozen, everywhere we passed by has lower radiation reading than what I am exposed every day simply by living in North America. (So I was safer over there, did I make a mistake of coming back to Vancouver?)

The amount of radiation in the air changes everyday depending on the weather and the direction of the wind. There is nothing we can do to change that until the situation at the plant can be stabilized. And it will take at least 9 to 10 months according to TEPCO. The real fear facing the people of Fukushima is this uncertainty of tomorrow and being told to leave their homes without knowing when to return. This is now causing greater wounds than the natural disasters. What will follow is the apparent economic downturn due to land contamination and the loss of a significant number of young people in communities where aging has already been a big concern for the whole nation. 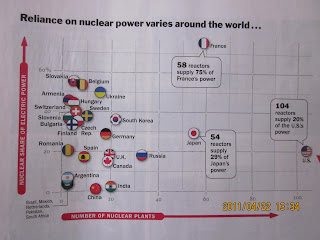 Our world today depends on nuclear energy far more than I had ever realized before going out to Fukushima. I took this photo from TIME magazine issued on March 28,2011. The horizontal arrow shows the number of nuclear plants in each country and the vertical arrow shows the % of energy dependency on the nuclear power. Perhaps what we can learn from Fukushima is applicable for the rest of the world. It boils down to the issue of choosing a lifestyle.

Choice.
I know I have freedom to choose, first internally about my own life how I am going to live, and then externally how we can together resist the forces of evil that keep ordinary people powerless, voiceless and ultimately in fear. That is an old lesson I had learned from Dalits in Bangladesh, and this time from the Sangas in Koriyama, the Sumiyoshis in Iwaki, and the Sasakis and many others I met in Fukushima. Some days I will do well, and other times I may fail. But I have a choice to get back up and carry on. And the power to choose comes from much deeper source than fact, it comes from faith. That's what elderly people in Iwaki are experiencing from Nakoso Christ Church and others.
Posted by Soohwan at 11:00 AM